Magnesium, NOT Calcium, Is Actually The Key To Healthy Bones

Researchers have shown that calcium alone is not enough for strong bones, and the daily intake of magnesium might actually be the key to healthy bones.

“Considering that 99% of the total body calcium is located in the bones, it is not surprising that academic proponents of high calcium intake have used as an argument the possible role of calcium deficiency in osteoporosis. There is no evidence, however, to support this view.

Osteoporosis is not more common in those parts of Asia and Africa where diets are relatively low in calcium (300-500 mg/day) than in Europe and North America where consumption of dairy products contributes to more than1000 mg of calcium/day. Also, when patients with severe osteoporosis were given massive doses of calcium, they went into positive calcium balance, but radiographic studies revealed no changes in the osteoporotic process. So where did that calcium go? Obviously into the soft tissues where it does not belong.”

The National Osteoporosis Foundation (NOF) agrees that food is the best source of calcium:

Calcium supplements have been widely embraced by doctors and the public, on the grounds that they are a natural and therefore safe way of preventing osteoporotic fractures.

It is now becoming clear that taking this micronutrient in one or two daily [doses] is not natural, in that it does not reproduce the same metabolic effects as calcium in food.”

Most supplements on the market today contain calcium carbonate, combined with some chelating agent to boosts its absorption. Yet, the end product is inferior to other calcium supplements like calcium orotate, which can easily enter the membranes of cells.

Additionally, calcium levels cannot be increased by the consumption of pasteurized dairy products, as this process only creates calcium carbonate, that cannot penetrate the cells without a chelating agent.

In such cases, the body pulls the calcium from the bones and other tissues in order to buffer the calcium carbonate in the blood, and this can lead to osteoporosis.

On the other hand, the findings of Professor Steven Abrams and his colleagues at the Baylor College of Medicine in Houston indicate that the intake and absorption of magnesium during childhood are vital for the total bone mineral content and bone density. Researchers maintain:

“Dietary magnesium intake may be an important, relatively unrecognized, factor in bone mineral accretion in children. “

“Lots of nutrients are the key for children to have healthy bones. One of these appears to be magnesium. Calcium is important, but, except for those children and adolescents with very low intakes, may not be more important than magnesium.”

The increased magnesium intake has been linked to higher bone mineral density (BMD) in men and women, and it is about 2 percent increase in whole-body BMD for every 100 milligrams per day increase in magnesium.

According to Dr. Susan E. Brown:

“Since magnesium participates in an astonishing array of biochemical reactions, it’s no surprise that it’s essential for healthy bones. Most notably, adequate magnesium is essential for absorption and metabolism of calcium.”

Similarly, the use of calcium supplements in the face of a magnesium deficiency can lead to calcium deposition in the soft tissues, such as the joints, where it can promote arthritis, or in the kidney, contributing to kidney stones.”

Since modern diets contain about 10 times more calcium than magnesium, and their optimal ratio is 1:1, it would be best if you take twice the Recommended Daily Allowance (RDA) for magnesium, which is 350-400 mg per day.

Divide the doses throughout the day, with meals. Moreover, enjoy an Epsom salt bath a few times a week, since it is a good way for the skin to absorb magnesium.

Remember, dietary sources remain the best sources of magnesium as well. Therefore, you should increase the intake of magnesium-rich foods like green leafy vegetables, nuts, seeds, and cacao. 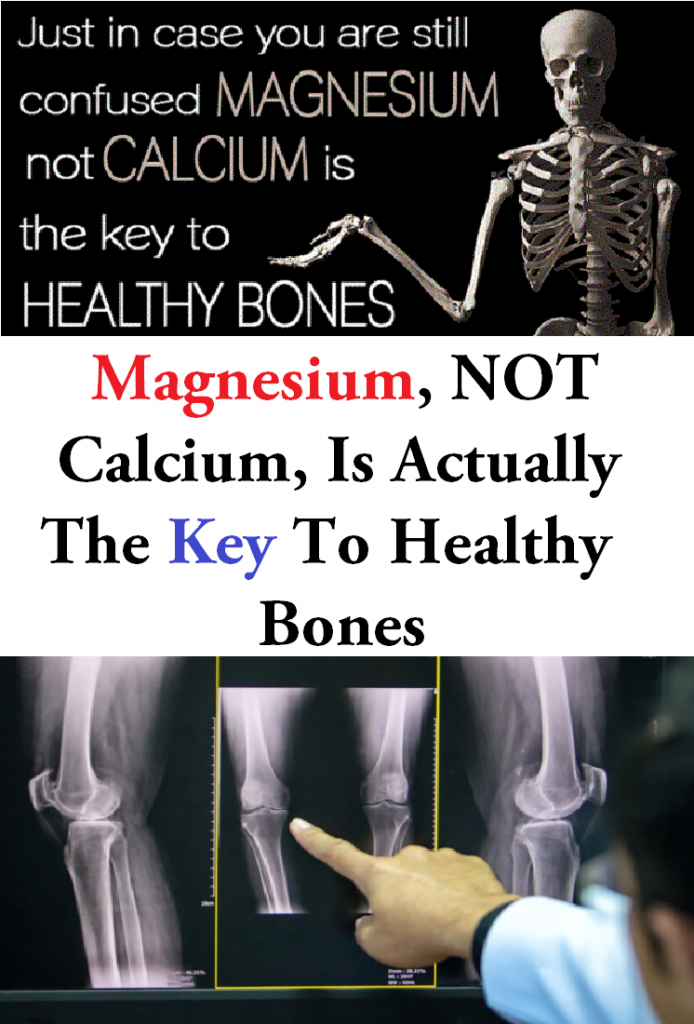