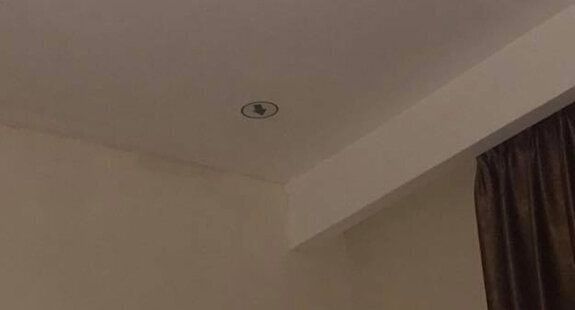 A woman’s confusion over an arrow printed on the ceiling of her hotel room in Indonesia has sparked discussion online about what the mysterious symbol could be.

The woman, who was staying at Grand Barong Resort in Bali, posted a picture of the symbol on Facebook.

“What is this?” the woman wrote.

READ MORE: What happens to your body if you eat too much cheese?

“It’s been stressing us out for weeks.”

Another woman added she was “wondering the same thing”. She had been staying in the same hotel.

One man jokingly suggested the arrow is pointing to the swimming pool.

But it turns out it’s of much higher significance – particularly to people of the Islamic faith.

One man pointed it out and explained the arrow is actually a Qibla pointer.

“Nothing you should worry about,” the man added.

The hotel confirmed this too adding there’s one in every room.

Qibla is the direction Muslims face during ritual prayer. It points towards the city of Mecca, Saudi Arabia.

According to a census conducted in 2010, 87.2 per cent of Indonesia’s population identifies as Muslim.

Said Kanawati of the Australian New Muslims Association told Yahoo News Australia he’s not aware of many hotels in Australia having Qibla pointers.

“To be frank – it’s quite primitive,” Mr Kanawati said.

“These days you can just use your iPhone. There are apps which now show you which direction to pray.”

READ MORE: Mom hit with $115 parking ticket while breastfeeding in her car: ‘Insensitive’

In 2010, a cleric from the Indonesian Ulema Council realised Indonesian Muslims had been praying in the wrong direction after the council made a mistake.

Ma’ruf Amin, from the council, said Muslims were facing towards Somalia and Kenya instead of Mecca.

However, he added all prayers were still heard as “God understands that humans make mistakes”.

Read More: No More Dental Implants, Grow Teeth by Yourself in Only 9 Weeks